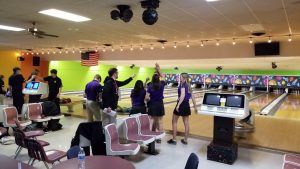 The Valley Center Hornets entered hostile territory Tuesday as they traveled across Newton to challenge the Railers in the second annual Crosstown Throwdown.

“Coach Pauls approached me about the idea last year,” said Coach Phillip Van Horn. “We both have big teams and we both play in Newton.  Lets see who’s best. I replied, ‘Game on!’”

Led by Senior Elisa Iotti, the Hornet ladies looked to repeat their titles from a year ago.  With three scores over 100 including her personal record of 165, Iotti claimed the individual title with a 399 series.

“I’m so proud of Elisa,” said Van Horn. “She’ll go back to Italy sometime, but to know that she’ll always be on our record board, that’s pretty special.  You want your players to play their best games towards the end of the season. She had a run of 8 straight frames filled. That’s like getting an A on a test you worked all semester studying for.”

Freshman Lysa Beck turned in a 380 while Senior Ellie Shank followed close behind with a 366, placing the tandem 4th and 5th respectively.  With 6 of the top 9 scores, the Hornets were able to eek out the team win.

“We didn’t throw out any scores tonight,” said Van Horn.  “Which deviates from most duals, but all 8 girls were in on it.  They scored 2714 all together and won by about 200.”

Led by Junior Ashton Luedtke, the guys hoped to repeat their title from a year ago.  Luedtke started with the two-round lead after a 173 and 182 start, but a rough 103 knocked him down to 3rd place.  Mason Hamm rallied in his final game for a 438 series, while Karson Keeler finished at 429. The tandem placed 4th and 5th respectively; however, two scores over 500 were enough to deny the Hornets a repeat.

“We enjoyed a lot of success there last year,” said Van Horn. “Anytime you walk away with an individual or team title, it’s a good night.  To get both the individual and team girls honor is a really good night.”

The Hornets travel down to Wichita for their final AVCTL dual against Goddard Thursday at West Acres.