For the second straight year, the Valley Center Hornet bowlers spent the first weekend of t 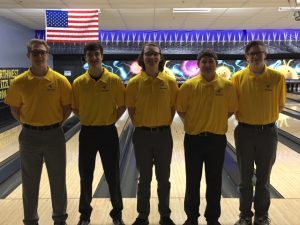 The boys kicked off tournament action pitted against the host Bishop Carroll Eagles.  Filling nearly every frame in their match, the Hornets started the day with a 407 to 378 victory.  After moving lanes, the Hornets struggled against their next opponents, Augusta. While they won the second of two games, they lost a narrow series, 315-324.  It was the low point of the day.

“At this point we were overthinking things,” said Coach Phillip Van Horn. “We were switching balls, changing targets, and just trying to force something to happen.  I just told the guys we needed to make a confident decision and if we were going to fix things, do it one at a time.”

After that, the boys went on a tear winning three of their last four matches.  In their third match, the Hornets posted a program PR of 444 against Wichita Southeast to win the series by over 100.  Then after a tough 392-339 loss to eventual top-five medalist Hutchinson, the Hornets won their final two matches. They rallied for a 404-292 decision over Andale and a final 383-353 decision over Sunrise Christian Academy.

“The weird thing about this tournament is that the final placing is really deceiving.  We placed 14 out of 26, which looks average, but I only see green,” said Van Horn. “We went 4-2.  We beat a medalist team head-to-head. We were one of nine teams that posted three 400 matches, so there’s a ton of big stuff here.  But the biggest thing, compared to last year at this meet, our baker average is up by about 30 pins a game. We’ve never struggled at match 10 pin bowling, but baker is our nemesis.  We’ve definitely figured out how to post competitive scores.”

And the year-to-year improvements carried over to the girls.  The girls began their day with tough losses to Wichita Northwest, 348-247; Derby, 340-209; Wichita South, 402-285; and Dodge City, 350-232.  However, in their final match of regulation, the Hornets earned a quality win against AVCTL foe Goddard, 270-212. In their final match of the day, the Hornets started strong against Wichita Heights, but a few late-game misses led to a 306-233 defeat. 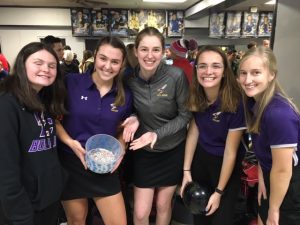 we average 123 per game, and compared to last year when we cracked 100 three times out of 12 at this meet, who’s complaining?  Not me.”

“Last year, we were the best two teams in the league.  We won the dual title. They won the tournament,” said Van Horn.  “It’s going to be the best dual in the league this year.”

The match is scheduled for a 2 p.m. start time Monday at Eastgate Lanes in Newton.